Micro-enterprises and SMEs spearhead use of blockchain in Spain 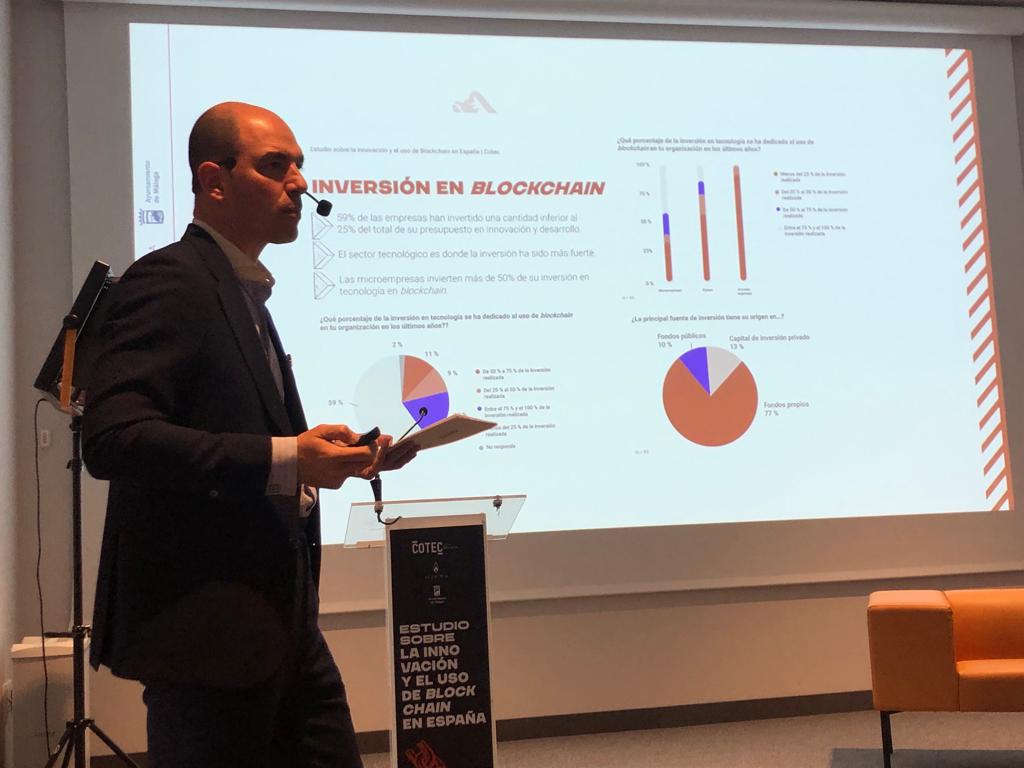 Málaga, 21 March 2022.- Small and medium-sized enterprises are leading the way in the use of blockchain technology in Spain. While 59% of Spanish companies have invested less than 25% of their R&D budget to blockchain, 60% of micro-enterprises have earmarked over 50% of their investment to this type of technology and, of these, 40% have invested more than 75%. Broken down by sector, the tech industry invests the most. This is a finding of the study La innovación y el uso de Blockchain en España a Spanish-language study on innovation and blockchain use in Spain carried out by Fundación Cotec para la Innovación and Alastria, in which nearly 200 organisations in the digital ecosystem were surveyed.

The study offers an in-depth look at the use of blockchain technology among Spanish businesses (large companies, SMEs and micro-enterprises), describes its innovative nature and identifies the role of universities in generating knowledge around distributed ledger technologies (DLTs). The study surveyed 152 large companies, SMEs and micro-enterprises from 15 Spanish regions – many from Madrid and Catalonia – and 21 economic sectors, as well as 26 universities. It also includes interviews with 12 experts from Spain and abroad and ten use cases in sectors such as energy, health, international trade, supply chain management and sustainability.

The study found that 97% of companies believe blockchain can be used in their organisation and that 65% of them already have projects under way. The data suggest that companies mostly use blockchain technology to innovate and generate new business models and, to a lesser extent, to improve existing processes. As for blockchain use by sector, banking stands out for using it to innovate in its area of activity. When broken down by size, micro-enterprises are the most likely to have blockchain as a source of innovation.

According to the study, although 69% of the survey respondents consider blockchain to be a strategic priority, it is a core business line for only 23%. Meanwhile, 49% of the blockchain applications developed by the companies surveyed are already being marketed, while 51% are still in the concept, testing or prototyping phase. The main functions are traceability (27%), logging (22%) and tokenisation (17%).

The survey used to collect quantitative data for this study shows that 86% of the companies that use blockchain have specialised workers, either on staff (61%) or through collaborations (24%). Banking stands out for having teams in-house, as opposed to the legal sector, which mostly outsources. Sixty-eight percent of companies have had difficulty finding specialised professionals, mainly those with technical backgrounds. Most companies plan to expand their blockchain team in the immediate future, except for large companies.

Other findings of this study are that blockchain technology is at an intermediate stage in Spain and that the blockchain ecosystem can be considered emerging and dynamic. The study also includes some recommendations for Spain to lead the way in this field and calls for public-private collaboration.

This study was presented today in a blended in-person/online event at the National Digital Content Hub in Málaga, bringing together Alastria CEO Juan Jiménez and Cotec CEO Jorge Barrero, as well as experts who explained the different practical uses of blockchain.