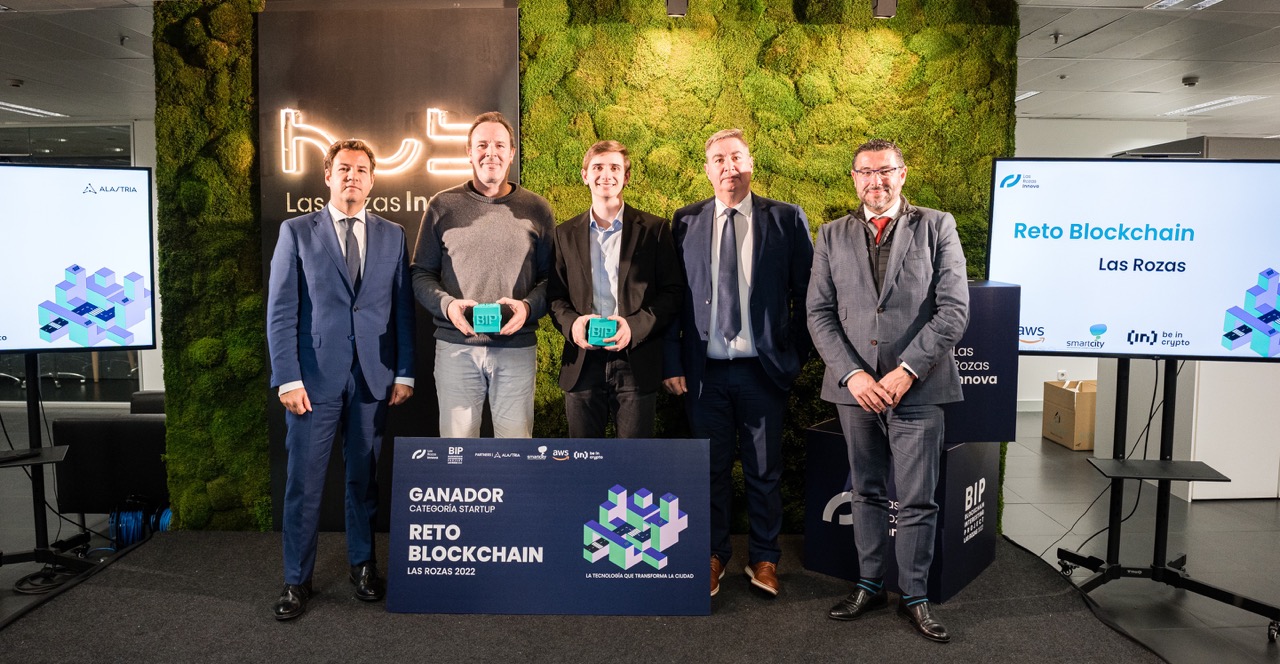 Madrid, December 5, 2022.- Blockchain technology continues to advance in its application in cities and specifically in Las Rozas. Proof of this is the final of the Blockchain Challenge Las Rozas 2022 held by Las Rozas Innova together with Alastria, an association that promotes this technology, in which the projects “Roofs that feed” and “FlyLow” won the BIP (Blockchain Interesting Project) Las Rozas 2022 Awards.

This is the second year that Las Rozas Innova and Alastria call this challenge or contest that seeks to identify projects and ideas to apply blockchain technology, which provides security and traceability in processes, in different cities and specifically in the fields of e-Government, IoT and sustainable Energy.

A total of 31 projects, national and international, have been submitted to the open call, of which, six went to the final that was held on Thursday at the Hub las Rozas Innova, the entrepreneurship space created by the Municipal Innovation Company in the Las Rozas Business Park for the growth and consolidation of technology-based startups.

The six finalists (three for each category: idea and startup) presented their projects before a jury, made up of eight experts in blockchain technology and smart city development, in a ceremony attended by the Deputy Minister of Local Administration and Digitalization of the Community of Madrid, José Antonio Sánchez, who pointed out “the commitment we have from the public administrations to boost talent and innovation to face the digital revolution we are living”; and the mayor of Las Rozas and president of Las Rozas Innova, José de la Uz, who reiterated “Las Rozas’ commitment to support entrepreneurs at all stages and offered the city as a space to connect and to test innovative solutions. ”

In the startup category it was Comunitaria with “Techos que alimentan” who won the 10,000 euros first prize and other prizes in kind. Miguel Prados, CEO of Comunitaria, presented his circular economy project that transforms solar energy from roofs into “social currencies” that can be exchanged for food in local stores. A sustainable solution with social impact that Comunitaria manages with blockchain to make the exchange secure, efficient and transparent. “Techos que alimentan” is a project launched in the neighborhood of Los Pajaritos in Seville that has brought technology in a simple way to all social sectors, as it works with an accessible and inclusive app and also has the option to replace digital transactions with tokens in the form of currency and ticket that work as a local currency.

In the idea category, the first prize (5,000 euros) went to “FlyLow”, the idea of César Gómez, a 21-year-old young man who presented a platform that provides real-time information on drones in a specific area, allowing to collect data on traffic density, or weather conditions, among others. An idea that, hand in hand with blockchain technology, responds to the need for secure and efficient management of drone traffic in the mobility of the future in smart cities.

In addition to the cash prize, which will allow them to continue developing their projects, both winners received prizes in kind, such as the incorporation to the Hub Las Rozas Innova for 6 months, access to the network of experts, training, membership benefits and events of the Hub community, among others. On the part of Alastria, the winners received a year of free membership to its network that will allow them to access different activities of the association and free support for the deployment of the use case in Alastria’s ecosystem networks. In addition, Amazon Web Services (AWS) provides them with credits worth 300 euros.

The ceremony was also attended by Victor Gardrinier co-founder of Solarmente, the winning startup in the first Las Rozas Blockchain Challenge, who shared how his solar energy exchange proposal with blockchain has evolved since he won the challenge in 2021 thanks, in large part, to the pilot initiated in Las Rozas that has allowed him to obtain real usage data from his platform. In addition to AWS, in this Challenge, Las Rozas Innova and Alastria have had the collaboration of the Spanish Network of Smart Cities (RECI) and BeInCrypto, international media. The awards ceremony was also attended by Elena de Arrieta, Communications Director of the DigitalES Association, as master of ceremonies.

The Blockchain Challenge is another step in the path initiated between Alastria and Las Rozas Innova in February 2021 to promote the development of blockchain technology in cities. This is a commitment that both entities acquired with the signing of a collaboration agreement to turn Las Rozas into a blockchain solutions testing laboratory. During this time, Alastria and Las Rozas Innova have held informative conferences and have launched two challenges to the ecosystem that have allowed identifying and scaling solutions based on this technology. The shared objective between Las Rozas Innova and Alastria is to generate an open ecosystem that favors innovation and promotes digital transformation to achieve greater competitiveness of the business sector, public administration and social agents.